What are an operator’s responsibilities if a driver loses their licence on medical grounds?

24 Jul What are an operator’s responsibilities if a driver loses their licence on medical grounds?

If a driver tells his employer his licence has been revoked because of a medical condition but insists the DVLA has got it wrong – what are your responsibilities towards him?
For Simmonds Transport the answer is simple: keep fighting. The Telford haulier employed Martin Walker as an HGV driver but after he was treated for a brain abscess in 2014 the DVLA revoked his licence and his career began to nosedive.

However, the company continued to employ him as a van driver, while at the same time helping him fight the revocation.
Fleet compliance manager Michael Collins says: “During the unloading of the vehicle, he was taken ill, which resulted in his admission to hospital and he received treatment for a burr hole for the aspiration of a right posterior frontal supratentorial abscess, which was caused by a tooth extraction.
“From there the DVLA said the licence was removed for five years and then it said 10 years.”

Written evidence
The company has letters from Walker’s GP, a neurosurgery consultant, and a neurologist, all stating that a change in his medical condition meant that, in their opinion, his HGV entitlement should be returned.
But the DVLA does not agree and has refused to budge from its position.
“In September 2016 a neurosurgery consultant stated that anti-epileptic medication was withdrawn one month after his operation and at the time of writing the letter in 2016 his prognosis was that the risk of further seizures after two years was minimal,” says Collins.

“We fought for months, going through all the procedures – even going to the Parliamentary ombudsman. It has now been four years with no seizures to date, or signs or any symptoms” he adds.
Collins acknowledges that there are a host of medical issues that make decision-making complex and difficult, but he advises other hauliers in the same situation to just keep trying and persist. “We hope that the DVLA changes its ways in the future and takes the consultants’ and neurosurgeons’ advice. Martin has remained an employee at Simmonds Transport throughout this period and continues to be a valued member of staff. It is unfortunate that the DVLA seems to be in disagreement with other medical professionals to enable the return of his licence. However, Simmonds Transport understands that the DVLA has a responsibility to road safety, therefore I feel it should judge each case on its merits.”

A fine line
Chris Sturman, chief executive at the Food Storage & Distribution Federation, threatened the DVLA with court action when his licence was taken away following mistakes made during a field of vision test (see box below). He agrees that hauliers have a responsibility towards employees, in the same way that employees have similar responsibilities. “It’s the same sort of issue we have in warehouses with forklifts,” he explains. “Under the Health and Safety at Work Act, the employee has a duty of care to himself and others in the workplace. Maybe there’s a two-way street here. “Bear in mind the shortage of drivers and the need to retain skills – subject to road safety – the DVLA should try and minimise the impact, both to individuals and to the companies that employ them.”
But he adds: “It’s a fine line; one has to look at it from the DVLA’s perspective as well. It has a duty of care to the public and to Parliament as well to do its job and manage risk properly.” 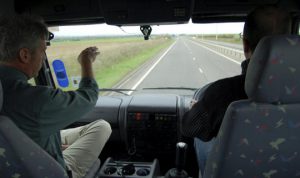